Support 100G interface and application technology types are very many and have their own characteristics. This is confusing for the choice of 100G data center users who are about to deploy: What type of 100G is the best choice for data center users from a technical level, a long-term upgrade, and a return on investment? This article attempts to provide some For advice.  Since the 2010 IEEE802.3ba standard date, 100G application from the technical level already has the feasibility, from 2010 to the present, 100G application and technical aspects of the discussion has been concerned about. And because the IEEE802.3ba, whether single-mode or multi-mode fiber technology based on the support of 100G applications did not form a large-scale application trends, which with the early standard multi-mode fiber applications to 10G * 10 parallel transmission 100G way, and single Mode optical fiber based on WDM technology to support long-distance way, the overall combination of optical transceiver and fiber-optic link the overall high cost, port power consumption, especially multi-mode fiber 100G and 40G interface and channel is not uniform and other factors related to more important The actual demand for the 100G market has not really been excited.

After nearly two to three years of development, 100G applications have formed a variety of technical types and alliances, whether it has been standardized IEEE802.3bm or SWDM, MSA and other weaving by 100G application model. Support 100G interface and application technology types are very many and have their own characteristics. This is confusing for the choice of 100G data center users who are about to deploy: What type of 100G is the best choice for data center users from a technical level, a long-term upgrade, and a return on investment? This article attempts to provide some For advice. The data center 100G application is in a silent period IEEE802.3ba standard since 2010 release, 40G based on multi-mode fiber parallel transmission of large-scale application is actually from the second half of 2013, during which there are some users choose BIGI technology based on 40G applications, after several years of large-scale Deployment, 40G has the overall market has stabilized state. And 100G of the large-scale deployment will be in a silent state of silence, why say so? Because the application of 100G is currently for many users is a real demand.

Figure 1 Ethernet port trend prediction from the DELL, you can see 2016 100G applications in the stage of rapid growth. 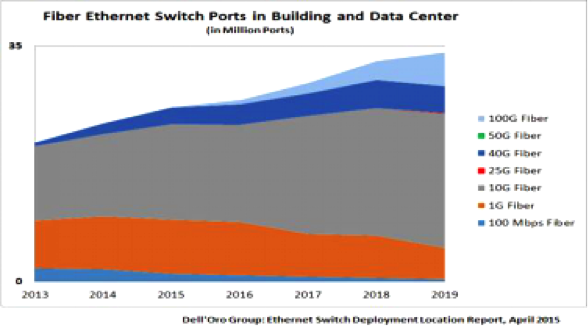 Figure 1 Global Ethernet switch port trends So what causes the 100G application to land? There are several factors that contribute to 100G Ethernet scale applications. From a macro perspective, data traffic is growing rapidly in recent years, according to Cisco's report, the global mobile network data traffic compound annual growth rate of 57%; Internet of Things (IoT) in the Chinese market investment growth compound annual growth To achieve more than 30% of the rapid growth of things makes the machine between the MTM (Machine to Machine) data traffic surge and many data 24 hours uninterrupted; In addition, according to statistics, the global triple play network investment year Compound growth rate of about 15%. In addition to the large number of predictable data growth trends, the next few years there are many applications based on Internet technology will promote the global IP-based data traffic rapid growth, the annual compound growth rate of 25% and cloud computing data center The proportion continues to grow, as shown in Figure 2 below.

The rapid development of the above mentioned multi-faceted applications needs to rely on data center network technology support. Cloud computing virtualization technology can significantly improve the utilization of data center servers, according to Cisco's forecast report statistics, the global cloud computing data center server load is the traditional data center server load of more than 2.6 times and the annual gap Also is constantly widening. In response to the server port data volume continues to improve. IEEE802.3by standard working group is developing a server port with 25G standard, can use a variety of media such as multi-mode fiber or dual-axis parallel cable DAC, and the upcoming new standard that is based on Cat8 copper 25GBase-T and 40GBase-T And other technologies. When the server port from 10G upgrade to 25G when the data center of the access layer network to the core network between the trunk connection and virtual data center between the connection between Spine and Leaf need to upgrade to 100G network, the overall network evolution needs Meet the requirements of convergence ratio. Multimode fiber per channel transmission 25G equivalent to IEEE803.3bm standard will separate a single transmission channel, whether from the market or technology to achieve service port 25G application is the trend, the new 25G standard will be officially released in 2016. These aspects are in the data center to promote the application of 100G network urgency and necessity.

Different types of data center determines the different needs of the current data center users are not deployed 100G needs, what type of users need to deploy 100G network? To answer this question, we can divide the data center into two categories , IDC (Internet Data Center Internet Data Center) and EDC (Enterprise Data Center Enterprise Data Center). Relatively speaking, some IDC data center to deploy 100G backbone network is more urgent, specifically, such as large Internet companies or operators of the data center or some large-scale cloud computing data center, nor completely exclude some large enterprises Data center users, but the overall proportion of the current stage of IDC using 100G ratio or more urgent. Application Model and Characteristics of Data Center 100G Mainstream The current market can achieve 100G applications, the interface technology has been very rich, for the actual data center, most of the data center connection between the distance of not more than 500 meters, unless the super-large data center park backbone may be part More than 500 meters. Based on my own experience, the author chooses the four models that are most likely to be applied to the data center from the current 100G interface model for further analysis, which is for the user to deploy 100G.

It is noteworthy that there are already some mainstream optical transceiver manufacturers in the promotion of 100GBase-eSR4, mainly to increase the luminous power to increase the transmission distance, 100GBase-eSR4 is expected based on the OM4 fiber based on the transmission distance of 200 meters to achieve The vast majority of data center backbone application length coverage, eSR4 will solve the parallel multi-mode fiber transmission distance bottleneck, greatly enhance the SR4 optical interface availability. Model 2: 100GBase-SWDM4, SWDM (Short Wavelength Division Multiplexing) refers to the short-band wavelength division multiplexing technology, in a core multi-mode fiber transmission of four bands of optical signals. The four bands of the multimode fiber are 850 nm, 880 nm, 910 nm, and 940 nm, respectively. The principle of wavelength division multiplexing is similar to that of CWDM on single mode, and SWDM is the first time that the wavelength division multiplexing technology is applied to the short wavelength band of multimode fiber. Figure 4 100G Base-SWDM4 transmission principle Traditional OM3 and OM4 multimode fiber main transmission window defined at 850nm, and if the use of SWDM technology requires four windows to transmit optical signals, four band light source is still cost-effective VCSEL vertical cavity surface emitting lasers. In order to improve the overall bandwidth, a new generation of multi-mode fiber WBMMF (Wideband Multimode Fiber) bandwidth will be a new upgrade, the bandwidth performance of the highest point in about 880nm band and the highest bandwidth than the traditional OM4 multimode fiber, Figure 5 Comparison of traditional multi-mode OM4 fiber and WBMMF fiber bandwidth.